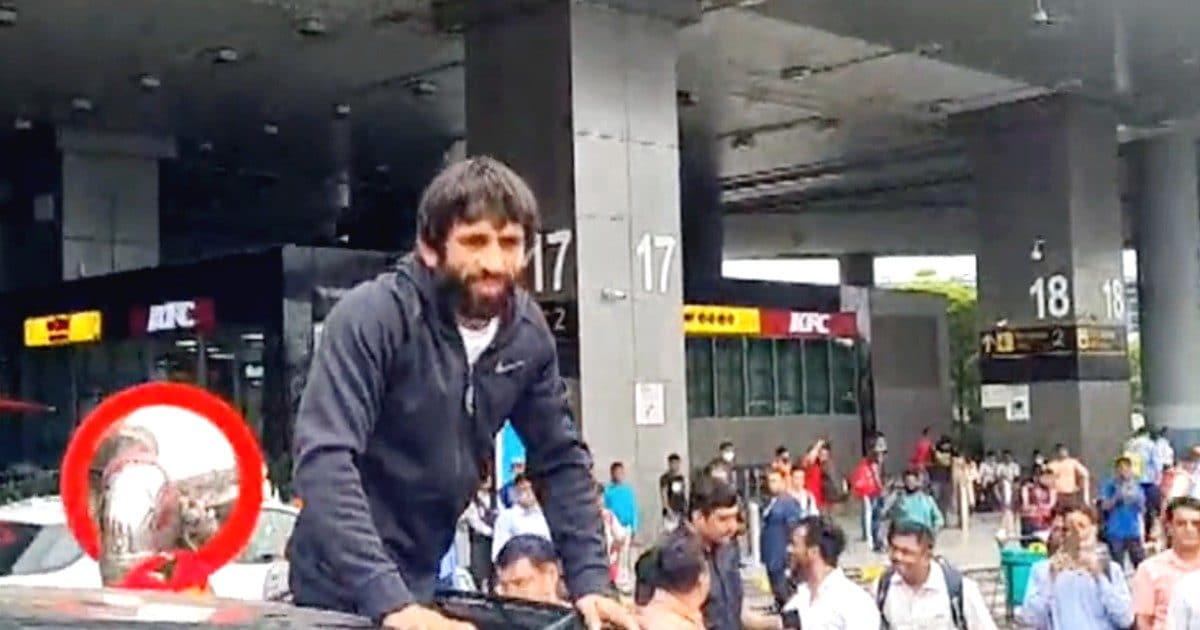 Bajrang had started bleeding in his head in his first match.

The doctors had put tape on his head, due to which the wrestlers were upset.

New Delhi: Olympic medalist Indian wrestler Bajrang Punia is upset over the “hard tape” used by doctors for a head injury during his match against America’s John Michael Diakomihalis in the quarter-finals of the World Championship. Bajrang said on Thursday that he found it difficult to concentrate on his match after using the tape. Bajrang, who was trying to win his maiden World Cup title, started bleeding from a head injury in the first minute of his opening match against Cuba’s Alejandro Enrique Vlades Tobier in Belgrade.

The doctors present there had put ‘hard tape’ over his injury, which is actually used to immobilize the knee and ankle. Usually tennis and basketball players use such tapes. Let us inform that on his return to India today, wrestler Bajrang Punia was given a warm welcome at the airport.

Bajrang said in an interview given to the agency, “God knows why did the doctors do this? This caused me a lot of trouble because the hair on my head was stuck in the tape. He pasted the tape on the wound without using cotton. I had to cut my hair at one point to remove the tape. It took more than 20 minutes to remove it.” He said, “Instead of strategizing against the American wrestler, my team and I were busy getting rid of the tape. I had 20-25 minutes between the two matches and all that time was spent removing the tapes.

Also read… Roger Federer’s farewell match will be a ‘doubles match’, Rafael Nadal may be the partner

Doctors should have pasted light tape on the injury: Bajrang
His personal physio Dr. Anand Dubey told Bajrang that ideally the doctors should have used a light adhesive tape. He said, “The hard tape causes swelling in the head. This also causes pain in the head of the person. You know how wrestlers put their hands on the opponent’s head. That’s why we decided to remove it and apply light adhesive tape.” Bajrang was eliminated from the race for the gold medal after losing to the American player by technical superiority. However, he later won the bronze medal through the repechage round.

Bajrang, the only Indian wrestler to have won four world medals, said he did not expect to lose to Diyakomihalis by technical superiority. He said, “I lost 10-9 to this wrestler in 2019. I am not saying that I would have defeated him easily, but I was hoping for at least one close match. First, the head injury and then this tape issue really bothered me.

Bajrang was not seen in full rhythm in World Wrestling

Bajrang defeated Vazhen Tevanyan of Armenia 7-6 in the repechage round to beat Puerto Rico’s Sebastian C Rivera 11-9 in the bronze play-off. Bajrang, however, did not appear to be in full swing during his campaign. He allowed the opposing wrestlers to score a lot of points and won most of the matches after falling behind. Terming it as worrying, Bajrang’s coach Sujit Mann said, “There are some areas where Bajrang needs to improve and ‘leg defence’ is one of them. I have no complaints about his strength, speed and aggressive manner. But you can’t let go of your foot so easily.

“The competition in the World Championship and the Olympics is almost the same. It is more difficult in 65 kg. You must have seen that Haji Alive (Azerbaijan) is an Olympic medalist, but has returned empty handed from Belgrade.

Drinking so many cups of tea daily reduces the risk of diabetes, research revealed

IND vs AUS: Indian team’s path has staggered even in Nagpur,...