Home India Twin Tower: How Supertech did such a big game, these 3 maps... 
Noida. The twin towers erected in the Supertech Emerald Court Housing Society have now become history. The twin towers, even higher than Qutub Minar, but built illegally, were demolished on August 28 with gunpowder. Supertech’s plan was to make these towers 40-40 storeys high and make it a unique building of Delhi-NCR but these towers built on the land owned by the residents had to be demolished. The story of the illegal and forcible construction of these towers erected on the land of the Green Area of ​​Emerald Society is revealing itself three maps of Supertech. These are telling how Supertech suddenly erected twin towers on the park land.

news 18 hindi K has three maps of Supertech. These maps are of the year 2006, the year 2009 and the year 2012. In which it is clearly visible how Supertech, using its money and ability, changed the map of its plan and the surrounding residents did not even get wind of them. A senior citizen of the residents who reached the Supreme Court told that by law the builder gets the map made for a housing society only once and gets it passed, if there is a need for minor changes, then the consent of the investing flat buyers But Supertech, according to its plan for Twin Tower, got 3 different maps passed in 3 different years which proved to be big evidence against Supertech in the Supreme Court. This first map of Supertech is from the year 2006. When the towers were to be built in the Emerald Court Housing Society. It is telling the complete plan of Supertech, in which it is clearly visible that the towers of the housing society like Aster, Aspire, Sovereign etc. are to be built. There is a big green area in the middle of all these towers where the park is to be built. It is like a central park surrounded by all the towers. Everything is clear on this map. Where there is a red circle, there is nothing. It is part of green area only. The second map of Supertech is of the year 2009. Everything else in this is the same as on the first map. However, the builder has increased the floor number of towers in this. In this, all the towers, children park, pump room, fire water, domestic water tank etc. are all like the first map but in the green area in the middle another figure is visible in the red circle. This shape is of two connected round towers which are twin towers. It looks just like electrical plugs which are standing connected to each other. In this builder’s map, this part of the green area is surrounded by these towers.
Third map, year 2012 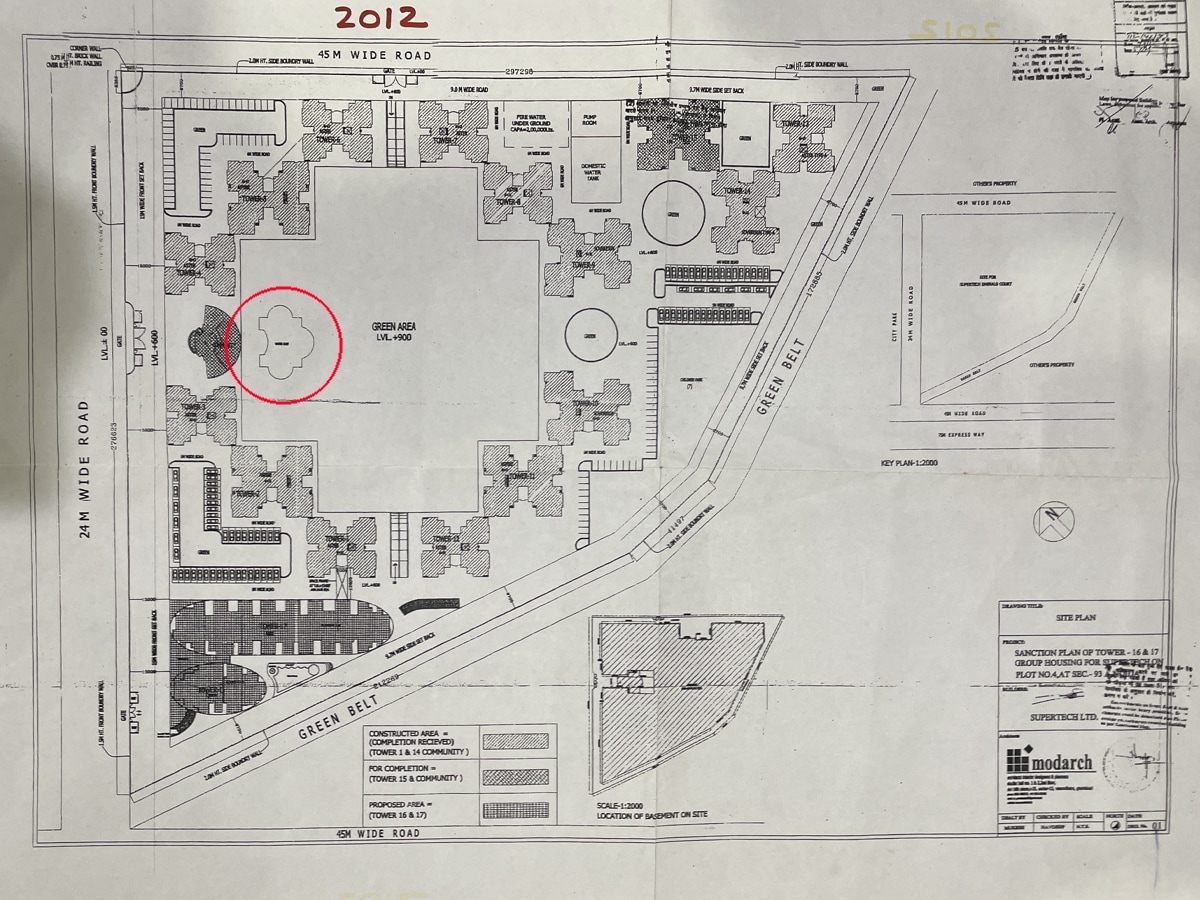 This map is from the year 2012, while the Twin Towers are clearly visible standing on one corner of the Central Park ie Green Area of ​​the Emerald Court Housing Society. These twin towers in the red circle are very close to the Aster and Aspire societies while away from the societies near the road. It is erected at one corner of the green area. However, if two towers of 40-40 storeys are erected right in front, it is bound to stop the sun and wind of the lower height towers behind. Not only this, the distance was also not taken care of in them. These towers were erected just 9 meters away.

One of the senior citizens who fought the case against Supertech for a long time and the resident of this society said that whatever is not in the first map, the builder created it in the second and third and did not even ask the people of the society for this. Gone. Directly in front of them two towers were taken and erected while this place was of green area for public use. The builder showed greed here and as a result both the towers were demolished.