Home Health Is it burning in the eyes and difficulty in breathing after twin... 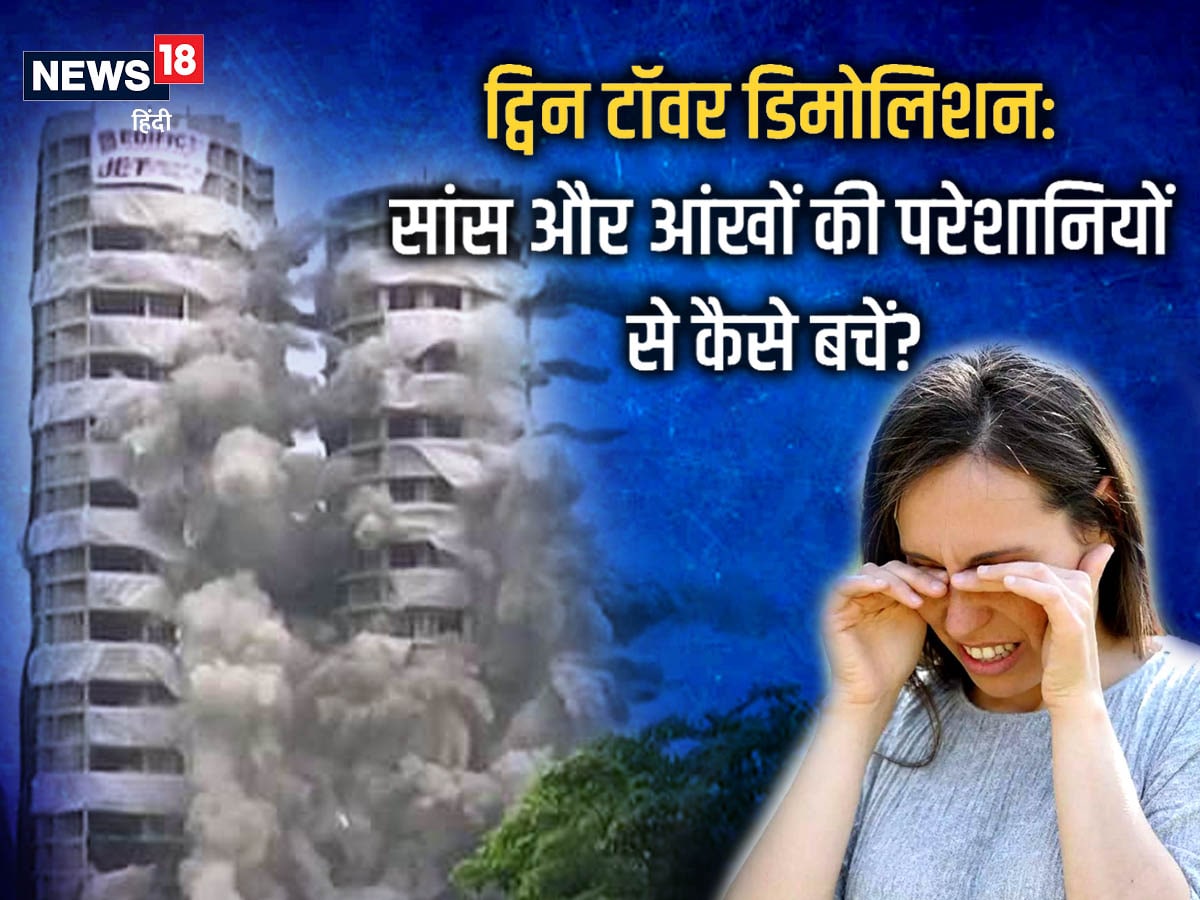 The maximum impact of pollution caused by Twin Tower Demolition will last for 72 hours.

This pollution can prove to be fatal for people recovering from severe Kovid-19.

Noida Twin Towers Demolition: The air has become polluted after the twin tower demolition in Noida. News18 report According to reports, due to demolition, some people living in the surrounding society are facing burning sensation in the eyes and difficulty in breathing. Experts had already feared that after the collapse of the tower, a cloud of dust would rise, which could affect the health of the people. People who are suffering from asthma or other respiratory diseases are being told the highest risk. We will know from the experts what precautions people should take to avoid these problems. Apart from this, what age people are most at risk from this.

What did the experts say?
of New Delhi of Moolchand Hospital Pulmonologist Dr. Bhagwan Mantri According to reports, after the collapse of the Twin Towers, dust, smoke and other pollutants have been found in the air. During breathing, these elements go into the lungs, due to which there is sudden difficulty in breathing. People who are suffering from asthma or respiratory diseases, it can lead to acute bronchitis or allergic reaction. Even healthy people are at risk of allergic reaction due to pollution. Its effect is also seen on the eyes and irritation starts.

Read also: The biggest reason for spreading diseases in the world came to the fore, everyone is at risk

What to do in case of trouble?
Dr. God’s minister says that if you are having trouble breathing, then do not leave the house. While going out, cover the mouth and nose properly with a mask or wet cloth. Mild symptoms will get better on their own, but if the problem is getting more, then contact the doctor. Asthma patients should consult a doctor and get their medicines promoted. Apart from this, carelessness should not be taken at all in taking medicine. To remove irritation from eyes, wash with clean water and use eye drops after consulting an expert.

Also read: These 7 Reasons Why Younger People Are More At Risk Of Heart Attack

People of this age are most at risk
According to the doctor, children below 14 years of age and people above 60 years of age are at higher risk of getting sick from this pollution. People who are already suffering from respiratory diseases, they are also at risk many times more than other people. Apart from this, those who have recovered from severe Kovid-19, those people need to be most careful. According to pulmonologists, the pollution caused by twin tower demolition will remain in dangerous condition for 24-72 hours. After that gradually it will start decreasing. Although it may take a month for it to be completely cleaned. The highest danger will remain for about a week.

Health Tips: Complete 10 thousand steps daily with power walk, you will get relief from dementia and cancer