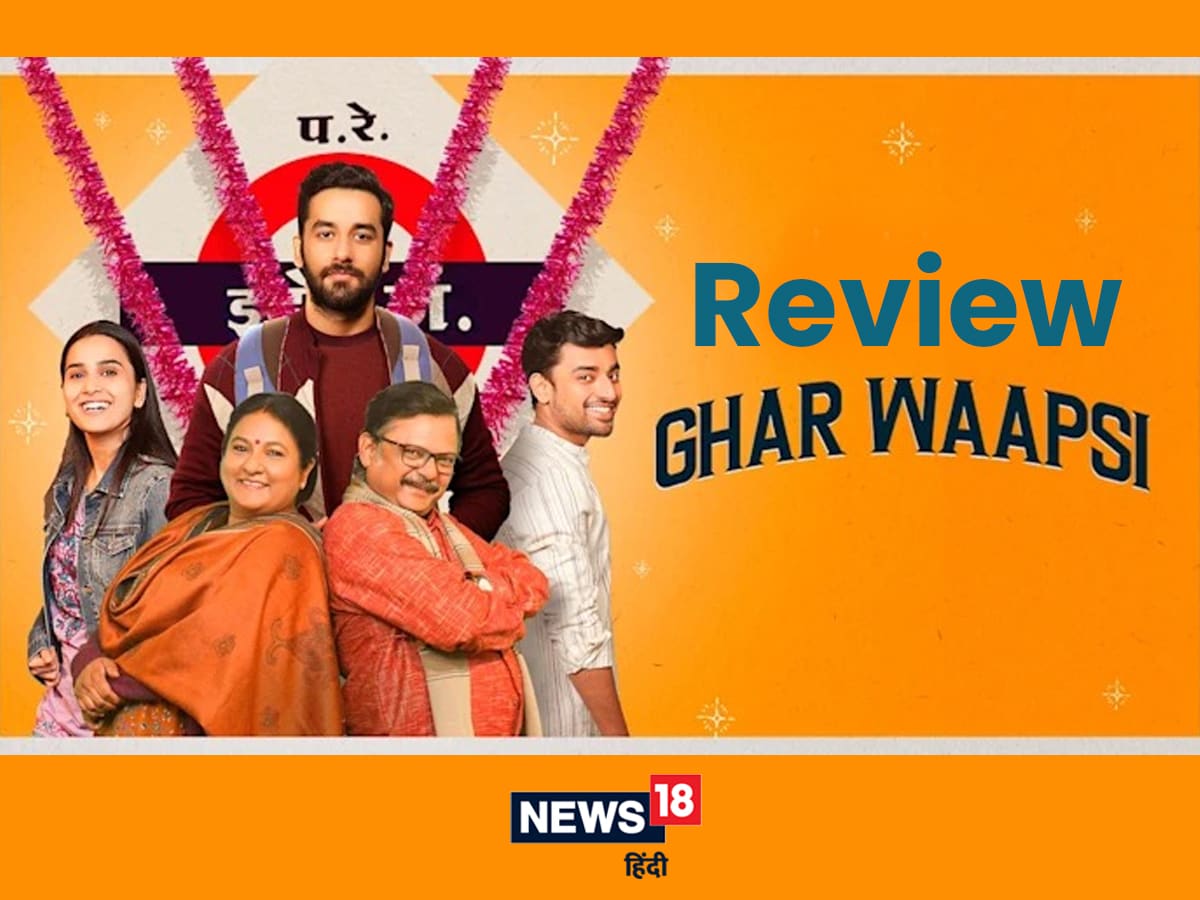 
‘Ghar Waapsi’ Review: In 2011, journalist Nilesh Misra started a program on a private FM radio station – Yaadon Ka Idiot Box. The youth, who started their life from a small town, run to big cities and metros in search of jobs and careers. After spending a few days in a bewildered state, they find their land in the sky of that metropolis. After passing a few years, being cut off from his family, something happens that reminds of his city. When the call of the heart takes it back to its home, its city, its soil seems to be very dry for some time, but after a few days the mind, which has become accustomed to being free, wants to go again to the narrow roof of its metropolis.

Sometimes the situation becomes such that the metropolis scolds and then that small town floating in a small river, is thrown out of that ocean. He has to return to his house where he is met by strangers, but after a few days the same pickle, the same vegetable and the same lad, stops him to plant it in his soil. When a boy who has gone from a small town to a big city in search of dreams, is fired from his job, he reaches his home, and tries to take life back a few years. Every moment he spent with the family, which he had thrown down from the high building of that metropolis, could live it. Ghar Wapsi, a web series on Disney+ Hotstar, is a bittersweet tale of a life tracing its roots. A series worth watching.

Shekhar Trivedi (Vishal Vashistha), who works in a software company in Bangalore, is fired. A job where everyone appreciates his work but his division is closed. After selling his savings and car, etc., for a few months, he gets EMI, but in the end he has to return to his hometown, Indore to his family. His father, who has run a travel agency for almost 30 years, an affectionate but bitter-spoken mother, a brother who dreams big and goes on making schemes like a small town boy, and a younger sister who is the first to take care of everything. She used to tell her brother but now she keeps hiding everything from him.

The equations within the family are disturbed. Shekhar keeps looking for a job but after a few days he tries to paint his father’s travel agency in a new light. In the rest of the time, he keeps trying to bring back the unspent moments with his family. What is the mood of a boy without a job in a middle class family, it has been shown well in this web series. Some scenes are amazing.

Writer duo Bharat Mishra and Tatsat Pandey have been writing short films, web series and branded content in digital media for the past few years. Tatsat is a resident of Indore and hence Indore is covered in the return home. The small things of the city are sprinkled with fun in the story and Shekhar’s classmate Darshan Bafna (Ajitesh Gupta) is a solid Indori. His language, his style of speaking, his expressions, his reactions and most of all his acting is complete Indore.

Ajitesh has been acting for many years but he is known as a Dastango. Ajitesh Khusro becomes and what an amazing thing in his program “Jo Dooba So Paar”, written, directed, starring and staged on Amir Khusrau. Ajitesh himself is a resident of Sitapur, Uttar Pradesh. Moving towards the climax, when Vishal Vashisht tells him that you are jealous of me because I have a friend like you but you do not have a friend, Ajitesh’s eyes make everyone cry. Saad Bilgrami of Uttar Pradesh is in the role of younger brother Sanju. Saw him in Gullak some time ago, then appeared in an important role in Khuda Hafiz 2. What a wonderful acting Saad! Whole younger brothers have become. That too in a small town.

It seems that even in Saad’s personal life, he is the younger brother. Akanksha Kaushik has played the role of younger sister. There is such a twist in the story about love and relationships when there is a disruption in the basic imagination of the family, it is because of Suruchi (Akanksha) and then Akanksha has told many things with a modest face. Vibha Chhibber is a storm. She is a mother and she is a complete mother, a solid, married in a very small town, a mother who follows some rituals and customs, keeps on seeing new versions of reality from her children again and again, keeps teasing, keeps grieving but mother Can’t stop being The role of father is played by Atul Srivastava. In scenes of protecting the plants of their garden by listening to the mantra, they loot the whole series.

This is homecoming success. Good story, good script, good dialogues, good acting, good direction, leave everything, only once you cry while watching Ghar Wapsi, then the series is successful. Congratulations to Ruchir Arun for a wonderful director. He kept fulfilling even the smallest demands of the script and went on to film the series. Indore has appeared as a character in itself in this series. The details of the city must have been written by Tatsam, but the idea of ​​putting them on the screen was amazing.

The success of Ghar Wapsi shows that even in a big city, only the people of the small town do wonders, just because of their direct intentions and gullible in mind, these small town people lose themselves by getting caught in corporate politics. When the whole country becomes a big city, then the innocence, sweet tongue, intimacy, love, relationships and sanskars made without meaning will also be lost somewhere. They should be saved from getting lost. If you want to refresh the memory of your roots, then watch Homecoming. Crying is also aloud, because even in years of loneliness, there is no place and reason to cry. Thanks to the writers, directors, actors and producers of this series. Some other part of it should be made, this time it should be a story of showing progress of A1 travel agency.