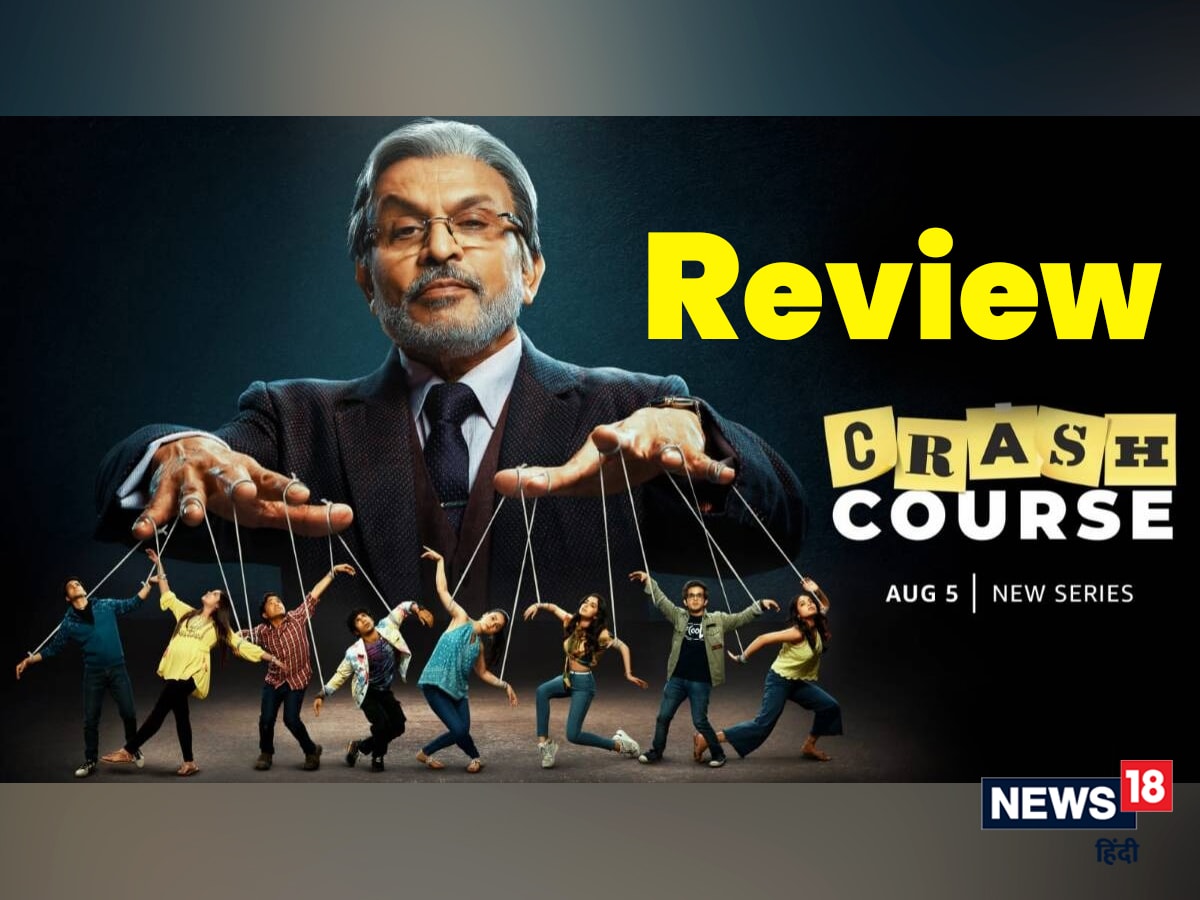 
‘Crash Course’ Review: In 2004, 18 years ago, a banker, Chetan Bhagat, leaving his job and dreaming of becoming a full time writer, writes a book ‘Five Point Someone – What Not to Do at IIT’. The book becomes very famous. Thousands of copies are seen being sold in book shops and thousands in busy city squares. Well-known directors like Raju Hirani also make a film about Aamir Khan on this book, but it is necessary to mention Five Point Someone here because after the publication of this book and getting fame, there was a revolution in the book world of India.

Suddenly more than 100 books on life settled in college and college hostel came in the market. In 2019, TVF released a web series named Kota Factory and after that web series on college life started coming like Hostel Days, College Romance, Girls Hostel etc. Kota factory was excellent then everything else was fine. A huge web series – Crash Course has now been released on Amazon Prime Video to show the dark world of coaching classes preparing for IIT admission in Kota. The only mistake of this web series made with the right purpose is that the producer-director wanted this web series to be the top number in the merit of the audience and so they used every angle they felt necessary in making it.

Comparing Kota Factory TVF is in crash course luck. No matter how hard the producer Manish and director Vijay Maurya put in, the benchmark for Crash Course is already set. Does Crash Course have the power to make viewers forget Kota Factory? No. There are some chapters in Crash Course which are good like Annu Kapoor. Seeing Annu Kapoor acting after a long time, it seems that this person can get more work. For Annu Kapoor, Ratanraj Jindal’s character is suitable for him. Coming from a traditional business family and always aiming to make a name for himself in the society, Ratanraj’s roots in the coaching business are exposed again and again by his behavior, ethics, and clothes.

Whatever you do, Ratanraj is seen abusing his mother and sister even after wearing a suit boot and treats the editor of the newspaper like this for the wrong news published about himself. Annu Kapoor has his limits but he has managed to turn into a hated character. The second successful chapter is Anushka Kaushik, who has previously been playing small roles in the web series. She changed her name from Anushka Sharma to Anushka Kaushik. Anushka Kaushik of Saharanpur, who started her journey with Tik Tok, has played the character of Vidhi Gupta. There is only one character in the entire series, in whose acting many shades are seen.

This girl comes to Kota with the dream of getting a top 10 rank in IIT and due to different aspects of her life, the audience is happy and sad along with her seeing the happenings with her. The character of Binny Aggarwal (Udit Arora) in the role of Vidhi Gupta’s brother is very well written and Udit has given his full strength to play him. Udit should get more work. His character and acting was also good in Jamtara.

We all know about Kota’s Admission Factory and Coaching Classes Mushroom. Culture of coaching classes, seeing every house in Kota converted into hostels, joining one coaching class to promising students of another coaching class by giving them free education, in addition to various lures, spending lakhs of rupees on good teachers, other classes Use a variety of tricks to finish. All this and many other things that have happened in Kota have been published in the newspapers for at least ten years. Circumstances don’t change. Every year lakhs of students from all over the country descend on Kota station, out of which around 95% of the students see their dream of IIT shattered and their families bear the brunt of it.

Earlier coaching classes were run by good teachers who really wanted to help the children. Now businessmen are present to run coaching classes, along with a whole team of professionals who do everything in a corporate way, even marketing the toppers in studies with drum-tashe-rally. Is. Tolerable pressure of studies, acquire knowledge of maximum subjects in minimum time so that you can fill up the booklets in the examination. If you can never pass in the exam or can not reach your destination, then either start taking drugs or commit suicide. Kota’s math is so simple.

In this case, director Vijay Maurya would not have had a problem because every element of a commercial web series has been included in it. Anyway, this week is of victory. Appeared as an actor in ZEE5’s Rangbaaz. Became a police inspector in Darlings on Netflix. And now have jumped into directing web series through Crash Course. Vijay basically makes advertising films. A film was also made “Photocopy”. Advertising is a short form. The story is 30 seconds. The extent of the web series is as much as the ocean, so it is important for the web series director and writer to keep in mind the basic spirit of the story. There is no single plot in Crash Course around which all other plots are built.

Crash Course would have become a Bhelpuri if the young actors in it had not done a good job and Chandrashekhar Prajapati of Piku had not excelled in editing. If you have been there for a long time and haven’t seen Kota Factory, then start by watching Crash Course. The web series is fine.