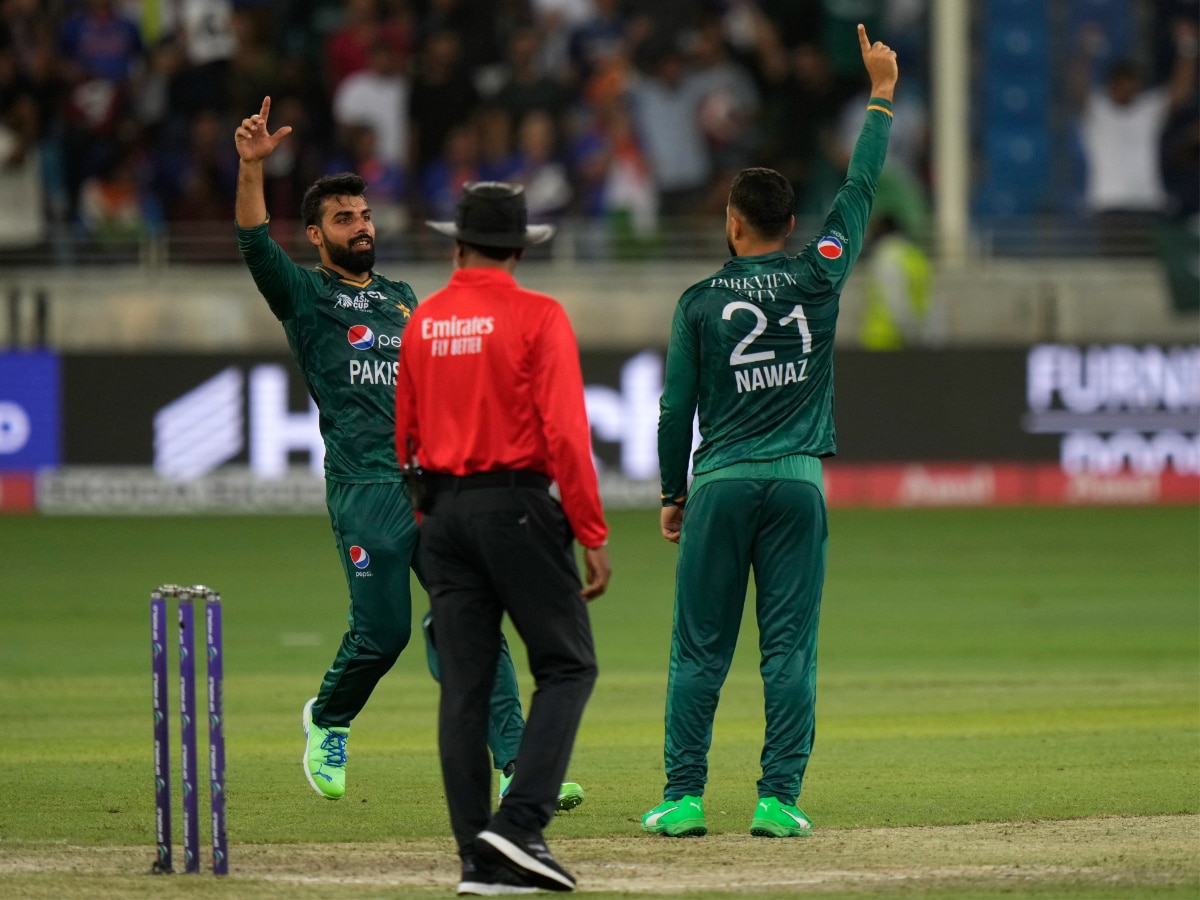 
Dubai. Under the leadership of Mohammad Rizwan, Pakistan has continued its impressive performance in the Asia Cup. The team defeated India by 5 wickets in a match of Super-4 (Asia Cup 2022). In this way, the team has also avenged the defeat from India 8 days ago. Pakistan has won the Asia Cup from India after 8 years and 4 matches. Earlier on August 28, India won by 5 wickets in the group round match. This is also Pakistan’s second consecutive win in the T20 tournament. Playing first in the match, India scored 181 runs for 7 wickets with the help of Kohli’s 60 runs. In reply, Pakistan achieved the target for 5 wickets in 19.5 overs. Rizwan scored 71 runs.

Chasing the target, the start of Pakistan was not good. Captain Babar Azam fell victim to leg-spinner Ravi Bishnoi in the fourth over. He scored 14 runs in 10 balls. Fakhar Zaman, who landed at number-3, shared a 41-run partnership with Mohammad Rizwan. Fakhar became the victim of leg-spinner Yuzvendra Chahal after scoring 15 runs off 18 balls. After 10 overs the score was 76 for 2 wickets.

Rizwan-Nawaz’s big partnership
After the fall of 2 wickets, Mohammad Rizwan and Mohammad Nawaz took over the team with a half-century partnership for the third wicket. Meanwhile, Rizwan also completed his second consecutive half-century. After 15 overs, Pakistan’s score was 135 for 2 wickets. Now he had to score 47 runs in 30 balls. Rizwan was playing 62 and Nawaz 42 runs. Chahal gave 43 runs in 4 overs.

Bhuvneshwar brought success
Bhuvneshwar bowled the 16th over. He dismissed Nawaz on the third ball. He scored 42 runs in 20 balls. Hit 6 fours and 2 sixes. He shared a 73-run partnership with Rizwan. 4 runs were scored in the over. Pandya bowled the 17th over. Rizwan hit a four off the second ball. But he got out on the 5th ball. He scored 71 runs off 51 balls. Hit 6 fours and 2 sixes. 9 runs were scored in the over. Now 34 runs were to be scored off 18 balls. Pandya gave 44 runs in 4 overs.

Brilliant bowling from Bishnoi
Bishnoi came to bowl the 18th over. Asif Ali survived the dismissal on the third ball. 3 wide balls. On the next ball, Arshdeep dropped a simple catch of Asif. 8 runs were scored in the over. Bishnoi gave 26 runs in 4 overs. Bhuvneshwar came to bowl the 19th over. The first ball was wide. Khushdil took one run off the first ball. Asif hit a six off the second ball. Then there was the wide ball. A run was scored off the third ball. Khushdil hit a four on the fourth ball. One run scored on the 5th ball. Asif hit a four on the last ball. A total of 19 runs were scored in the over.

Rohit-Rahul got off to a quick start
Earlier, India scored 181 for 7 with Virat Kohli’s fine half-century. Kohli scored 60 runs in 44 balls with the help of 4 fours and a six. The opening pair of captain Rohit Sharma (28) and Lokesh Rahul (28) gave India a quick start. Apart from these top three batsmen in the batting order, the other batsmen, however, could not play well. Leg spinner Shadab Khan was the most successful bowler for Pakistan, who took 2 wickets for 31 runs. Left-arm spinner Mohammad Nawaz took one wicket for 25 runs while bowling economical.

62 runs in first 6 overs
After losing the toss, India got off to a fast start by adding 54 runs in 5.1 overs by captain Rohit Sharma (28) and Lokesh Rahul (28). In the very first over, Rohit hit a four and a six on Naseem Shah (one wicket for 45 runs), while Rahul also hit two sixes in the next over of this fast bowler. Rohit welcomed Haris Rauf (1 for 38) with fours and sixes in successive deliveries. But in the next over of this fast bowler, Rohit waved the ball in the air and caught Khushdil Shah. He hit 3 fours and 2 sixes in his 16-ball innings. India scored 62 runs for one wicket in the power play.

Suryakumar could not play big innings
In the next over, on the very first ball of leg-spinner Shadab Khan, Rahul caught Mohammad Nawaz at long-on. He hit 2 sixes and a four while facing 20 balls. As soon as Suryakumar Yadav came, he opened the account with a four on Shadab and then made Nawaz’s ball also visible to the boundary. Kohli was lucky on Shadab’s delivery when the ball took the outer edge of his bat but the ball went for four by a mistake by Naseem standing at short third man. Suryakumar, after scoring 13 runs in 10 balls, was caught by Nawaz on the square leg boundary to Asif Ali.

pant and pandya fail
India’s century of runs was completed in the 11th over. Kohli and Rishabh Pant (14) hit fours in Naseem’s over. Pant also hit Shadab for a four, but in an attempt to sweep this leg-spinner’s next ball, Asif was caught at backward point. Hardik Pandya returned to the pavilion in the next over without opening an account off Mohammad Hasnain, making India’s score 131 for 5 wickets.

India vs Pakistan: Fakhar Zaman made a child’s mistake, even dropped a simple catch, became a villain, VIDEO

Deepak Hooda (16) hit fours on Rauf and Hasnain. Kohli completed the 32nd half-century of his career in 36 balls with a six on Hasnain. In the next over of Huda Naseem, waving the ball in the air and caught Nawaz. Kohli was run out after scoring a run in the first four balls of Rauf’s last over. Ravi Bishnoi (8 not out) took the team’s score beyond 180 runs with a four off the last 2 balls.