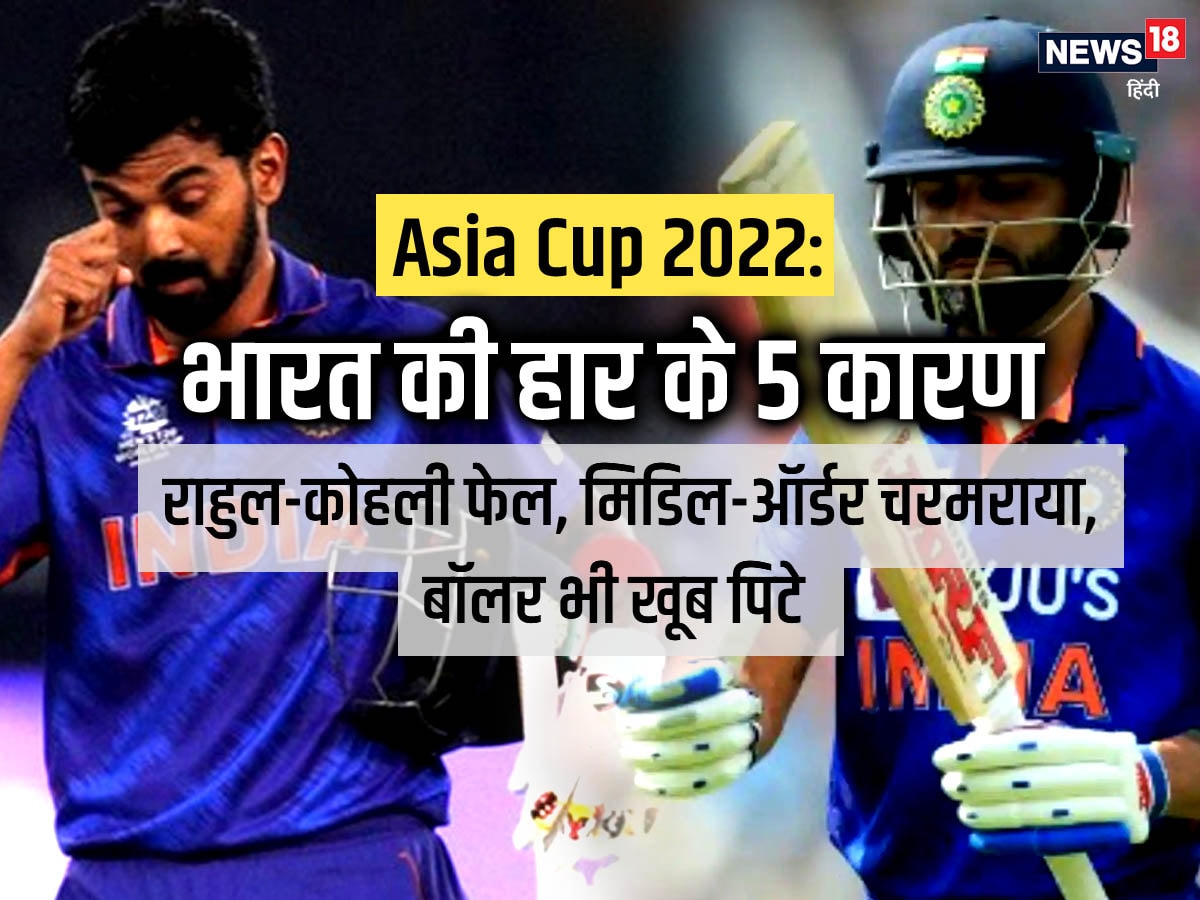 Both KL Rahul and Virat Kohli could not play big innings

Except Yuzvendra Chahal, no other bowler could leave a mark.

New Delhi. After suffering a defeat at the hands of Pakistan in the first match of the Super-4 round of the Asia Cup, the Indian team also lost to Sri Lanka. Sri Lanka easily chased down the target of 174 runs in 20 overs. Batting first in this match, India did not start well. Within 3 overs 2 wickets had fallen. After this Rohit Sharma played the captaincy innings. But, the rest of the batsmen could not support him. Some batsmen started well, especially in the middle order. But, could not convert it into a big innings. Rishabh Pant and Hardik Pandya once again proved to be a flop with the bat. Apart from these, there are many culprits of India’s defeat. We will learn about them one by one.

KL Rahul’s poor performance continues
Ever since KL Rahul made a comeback in Team India after surgery. There has not been a big innings from his bat. He made a comeback from the ODI series against Zimbabwe. But, he was able to score 31 runs in the entire series. His form is seen in the Asia Cup as well. His account did not even open against Pakistan in the opening match. However, after this, he made a good start in the second match against Pakistan in Hong Kong and Super-4. But, both could not convert this start into a big innings in the match.

The same thing happened against Sri Lanka. He got out after scoring 6 runs. In such a situation, in the match of do or die in the powerplay, India needed a start in the powerplay. Did not get the same and India could not make a big score.

Virat Kohli also settled cheaply
By the way, Kohli is running in excellent form in the Asia Cup. He scored the highest 60 runs in the last match against Pakistan. But, against Sri Lanka, he could not maintain this momentum and became clean bowled by playing bad shots in the pursuit of playing the new template of the team i.e. attacking cricket. Kohli could not even open the account while KL Rahul was out in the last over. In such a situation, Kohli was expected to make a sensible innings like Pakistan. But, he lost the wicket by playing the wrong shot. This put pressure on the middle order.

Pandya is unable to show power
Leave aside the opening match against Pakistan in the Asia Cup, in which Hardik Pandya played a match-winning innings while chasing the target. Since then, the performance of this all-rounder has been lackluster with both the ball and the bat. Pandya was rested against Hong Kong. He was dismissed for zero in the last match against Pakistan and conceded 44 runs in 4 overs. He expected a good innings against Sri Lanka. But, Hardik was disappointed. He started well. But, could not convert it into a big innings and got out after scoring 17 runs in 13 balls. He also conceded 35 runs in 4 overs.

Rishabh Pant’s bat also remained silent in the Asia Cup so far. He also played as many balls as Hardik and scored the same number of runs. Deepak Hooda also could not capitalize on the opportunity and went on scoring 3 runs in 4 balls. India lost both Hooda and Pant in the 19th over and it was the turning point of the Indian innings. The middle order batsmen spoiled the hard work of captain Rohit Sharma. Rohit scored 72 runs and the rest of the batsmen put together 93 runs.

Asia cup 2022: After Ravindra Jadeja, Avesh Khan also out, know who got the chance?

Indian bowlers also got beaten up
The Indian bowlers were also guilty of the defeat against Sri Lanka. Arshdeep Singh failed to take a wicket with the new ball. Sri Lankan openers Pathum Nisanka and Kushal Mendis took full advantage of this and scored 57 runs in the first 6 overs of the powerplay. Arshdeep gave 26 runs in his first two overs. Hardik Pandya also bowled an over in the powerplay. But, he also conceded 10 runs. The Sri Lankan opener also scored 11 runs in the first over of R Ashwin. In the first 11 overs, Sri Lanka laid the foundation of victory by scoring 97 runs. On which the batsmen who came later erected the building of victory.