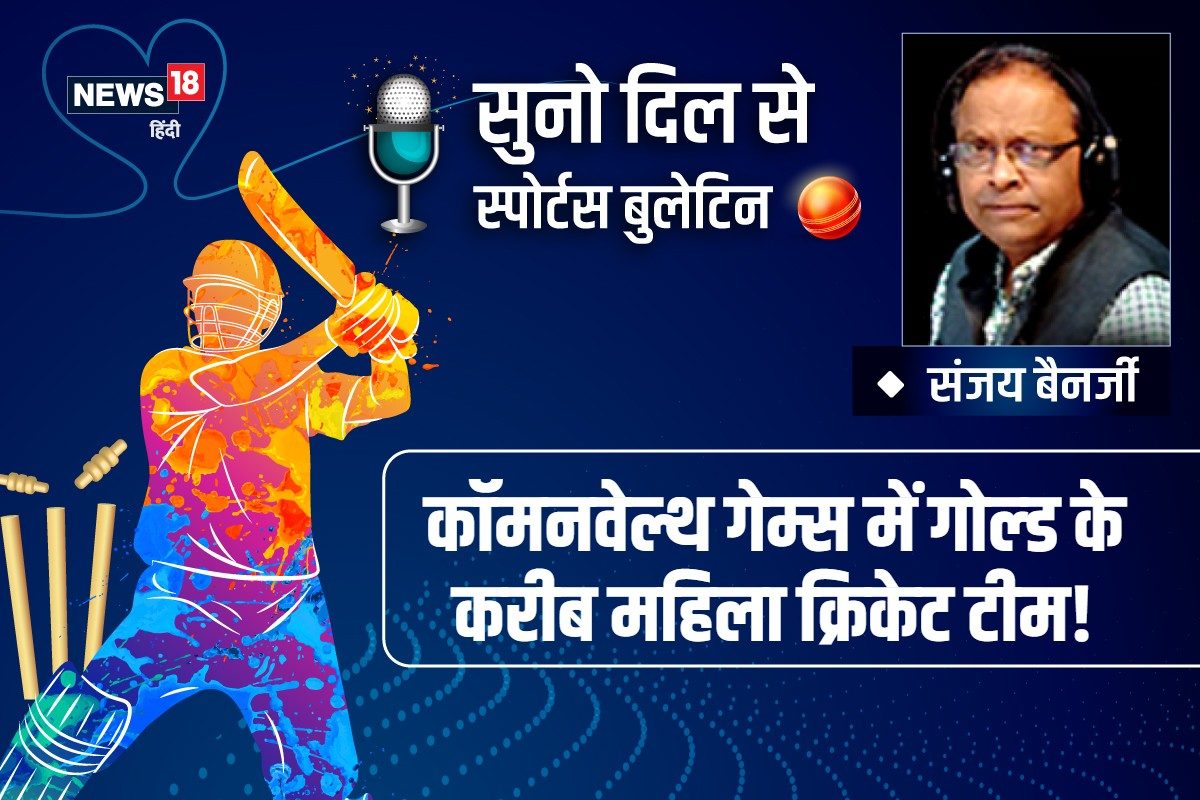 
Today, in ‘Suno Dil Se’, we will first talk about the ongoing T20 series between India and West Indies. It will be talked about next, the performance of the Indian women’s cricket team going to play the Commonwealth Games and the expectations in the semi-final match and finally there will be talk of Asia Cup shifted from Sri Lanka to UAE.

Accept Sanjay Banerjee’s Namaskar – Suno Dil Se with a podcast based on the week’s cricket activities.

In the ongoing T20 series between India and West Indies, eye-balling continues. India won the first match and West Indies in the second. In the third match, India won again and currently India are 2-1 ahead in the series. Whatever be the result of the series, but just two months before the T20 World Cup, India’s experiment continues.

Ishan Kishan did not get a chance in the last two ODI series, before that in the T20 series, he did not live up to the expectations. In such a situation, Suryakumar Yadav was tried in search of another option. He did not play in the first two matches, but while chasing in the third match, Sky improved the way ahead by hitting 76 runs in just 44 balls with the help of eight fours and four sixes.

It also has to be seen here that captain Rohit Sharma flopped in the second and third matches after scoring a half-century in the first match. In such a situation, who will be fit as an opener, cannot be said. Rishabh Pant, Ishaan Kishan and Lokesh Rahul have also been tried at this location. India have to play a few more series before going to Australia, and it seems that the series of experiments will continue till the end.

However, the performance that India has done so far against the West Indies is satisfactory. Batting or bowling, players have contributed for Team India by sharing their mills. For example, if Rohit Sharma walks in the first T20, Suryakumar in the third. The contribution of Dinesh Karthik, Hardik Pandya was no less.

It was a bit difficult situation in the bowling. No one bowler dominated. Ashwin, Arshdeep and Bishnoi managed to take two wickets each in the first match, while Bhuvneshwar Kumar got two wickets in the third. In bowling, Hardik Pandya has not got a wicket in the series so far, but he is one of the most reliable players of the Indian team, so there cannot be any question mark on him at the moment.

On the other hand, Kyle Meyers, Brendan King and Devon Thomas played better innings in the series for West Indies. Jason Holder is considered a big player of the small format, but in the two matches he got a chance, his performance was not encouraging at all. In this case, one has to praise Obaid McCoy, who shook the Indian innings in the second match of St Kitts and took six wickets for just 17 runs and bundled out the entire Indian team for just 138 runs.

In the second match during the series, the match started three hours late due to late arrival of Indian players’ kits. But there was no problem in the third match, but still the match started with a delay of one and a half hours.

The problem was also about the remaining two matches of the series, because it was to be played in the US city of Florida. Despite this long-standing program, the US visa was not ready for Indian players. But after the intervention of the President of Guyana, the visa problem is over. The matches will be played at the scheduled time on 6th and 7th in Lauderhill, Florida. India has previously played four matches at this venue in 2016 and 2019, out of which it won two and lost one. West Indies have also won three out of 8 played here and lost four.

On the other hand, India’s women’s team is currently playing in the Commonwealth Games, and has raised its medal hopes by entering the semi-finals. Tomorrow the semi-final match will be played against England. Australia will take on neighboring New Zealand in the second semi-final. Women’s cricket has been included in the Commonwealth Games for the first time. In Group A, Australia made it to the semi-finals after winning all three matches and India won the second place after winning two matches. Barbados, Pakistan, Sri Lanka and South Africa are currently out of medal prospects in cricket.

The Indian team is consistently performing well under the captaincy of Harmanpreet Kaur. Australia defeated India by three wickets in the first match, but in the second match, India defeated Pakistan by eight wickets and in the third match, Barbados by 100 runs.

India gave a tough competition to Australia in the opening match of Group A. Once upon a time Indian women were on their way to an easy victory. India had scored 154 runs. In response, when India had bundled out Australia’s first five wickets for only 49 and then the first seven wickets after that for only 110 runs, then it seemed that an easy victory would be found. But once again the weakness of the Indian bowlers came to the fore. The mistake of taking the opposition tailenders lightly turned the dice. Australia won this match by three wickets. In this match, Harmanpreet Kaur scored 52 and Shefali Verma scored 48 runs for India.

India won a big victory in the third match of the group against Barbados. In this, Shefali scored 43, Deepti Sharma 34 and Jemima Rodriguez scored 56 runs for India. While Harmanpreet was dismissed on the first ball without opening the account.

The player who has won everyone’s heart so far from the Indian women’s team is Renuka Singh Thakur. This 26-year-old Himachal Pradesh medium pacer has taken nine wickets in three matches. However, in the nine T20 matches she played before, she got only three wickets.

Here the Indian team has to play a series of three ODIs on the Zimbabwe tour this month. For this, Shikhar Dhawan has been made the captain again. Apart from Rohit, Virat Kohli, Rishabh Pant, Hardik Pandya, Jasprit Bumrah and Ravindra Jadeja have been rested. Washington Sundar and Deepak Chahar have returned in this Indian team while Ishan Kishan and Sanju Samson will remain as wicketkeepers. Along with this, Rahul Tripathi has also been included in the team. The Indian team will play one-day matches in Harare on August 18, 20 and 22.

And finally the Asia Cup. The schedule for the Asia Cup shifted from Sri Lanka to UAE has been released. According to this, India and Pakistan can collide three times in this competition. The first match in Group A will be between India and Pakistan on August 27. It is expected that India and Pakistan will also qualify for the Super Six from this group, and it is also possible that they will have another clash in the final.

It was a podcast based on the cricket activities of the week – Suno Dil Se. Allow Sanjay Banerjee till next week, Namaskar.

Hackers are installing malicious packages in Python code repository, millions of apps are at risk, know what it is