After the victory over Pakistan, Virat came to meet a special fan.

New Delhi. Virat Kohli’s fans are present not only in India but in almost every country that plays cricket. Even though Kohli has an aggressive stance on the field, but outside him, he looks serious. Especially Kohli never disappoints his fans. Whenever he gets a chance, he makes fans’ day. Kohli did something similar after the Asia Cup match between India and Pakistan. He reached Sri Lanka to meet his special cricket fan Gayan Senanayake. Kohli did not go alone, but Team India captain Rohit Sharma was also present with him. Please tell that Gyan is handicapped.

Gayan Senanayake shared a picture of his meeting with Virat Kohli and Rohit Sharma on his Twitter account. With this he wrote, Today met Virat and Rohit. Senanayake has previously appeared in the stadium during many international matches.

Senanayake is a big fan of Sri Lanka cricket team. He has not been able to forget the defeat of Sri Lanka at the hands of India in the final of the 2011 World Cup. But, he also likes Virat and Rohit a lot. He has a special bond with Kohli. He also attended the wedding reception of Virat and Anushka Sharma. 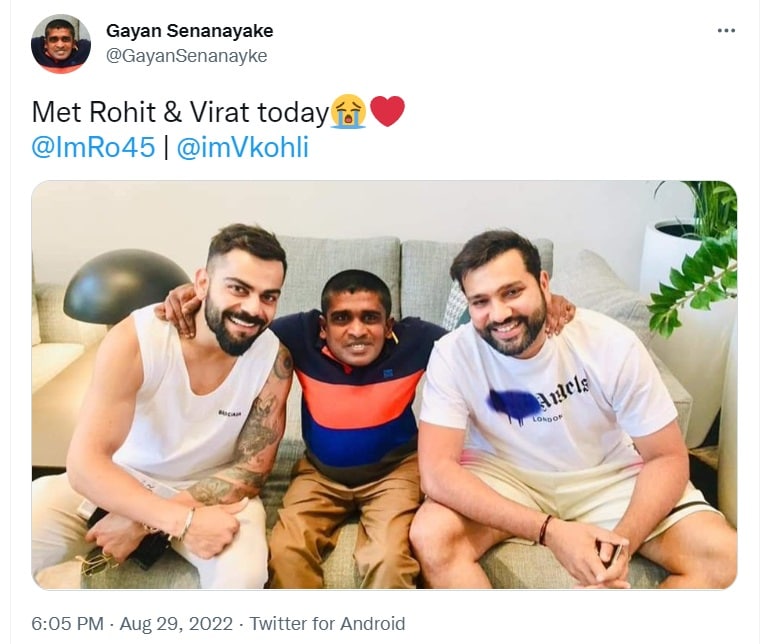 Let us tell you that India defeated Pakistan by 5 wickets in their first match of the Asia Cup. In the match, Indian captain Rohit Sharma won the toss and elected to bowl first. Indian fast bowlers bowled amazingly and bundled out Pakistan for 147 runs. For India, Bhuvneshwar Kumar took 4 and Hardik Pandya took 3 wickets.

Chasing the target, India did not have a good start and KL Rahul was dismissed without opening an account in the very first over. After that Rohit Sharma also returned to the pavilion adding 10 runs. Virat Kohli scored 35 runs. But, later Hardik Pandya and Ravindra Jadeja batted well and gave India a 5-wicket victory. Pandya scored 33 not out.